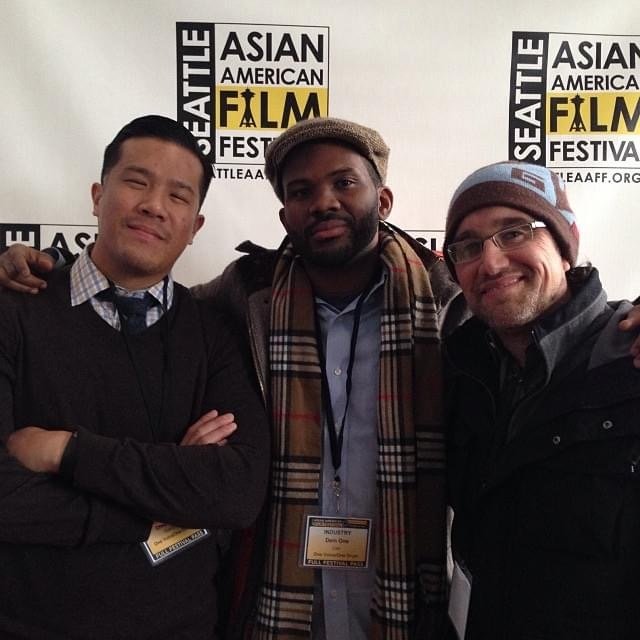 I recently had an inspiring conversation with my friend PC Muñoz, recording artist, writer and producer of the GRAMMY®️-nominated contemporary classical album “Strange Toys” By Joan Jeanrenaud. He is based in San Francisco. He has been described as an artist with a “deep social conscience…who uses music to connect cultures and communities together” (Anil Prasad, Innerviews).

One of the most compelling things about Muñoz is his breadth. He draws insights from seemingly disparate sources and styles. He collaborates with a wide range of creators, from composer/cellist Joan Jeanrenaud and poet/chanteuse Ingrid Chavez, to rock legend Jackson Browne and Dr. Fink of Prince and the Revolution. He also creates music for Bay Area choreographer Robert Moses.
One of Muñoz’s latest projects is BLACK PACIFIC, commissioned by Mosaic America. Created in partnership with San Jose hip-hop artist DEM ONE (Demone Carter), it examines “the intersections between Black American and Pacific American experience, music, and culture – with a (side) eye toward physical, spiritual, and artistic colonization/subjugation and a forward eye towards an inclusive definition of ‘American.’”

I learned many things from our discussion. Here are four key takeaways that apply to anyone seeking inspirational collaborations.

Choose your collaborators wisely. Work with people who push you to adopt a new perspective or see things in a different light. Creativity gets ignited when we connect with people who take an approach that differs from our own. For example, as they began to discuss BLACK PACIFIC, Carter came up with the idea to go back a generation for inspiration. He and Muñoz interviewed their parents and discovered that all of them came to California to pursue a way of life that offered them more freedom. “The geography of freedom” became a central theme of the work.

Muñoz observes, “Comfort is a killer for teams, for growth, and for broadening your perspective.” He enjoys working with Carter and other collaborators who push him out of his comfort zone. At the same time, he carefully chooses collaborators who are committed to working from a place of trust and respect. This allows honesty and open communication to flourish.

When you start working with someone, define your goals and expectations in clear terms. Ask your collaborator to do the same. Conflicts or disagreements inevitably arise whenever you work with someone who pushes you in new directions. Muñoz says, “sometimes you have to let go of some stuff that you thought was precious to the project.” Return to shared goals and principles in those moments of conflict and hard decisions in order to keep moving forward.

Learn from the journey

Muñoz and Carter began their collaboration on BLACK PACIFIC prior to the COVID-19 pandemic. They initially planned for a live premiere, but pivoted to working on film when live venues were shut down. They approached Christopher Woon-Chen, a filmmaker who directed their previous videos, and reconceived the work.

Almost weekly, Muñoz and Carter met virtually over the last year to discuss their research, collect images, and create a narrative structure for the BLACK PACIFIC film. After months of working in this way, they realized that live performance remained their preferred medium. They hope to premiere the work later ini 2021.

Although they have pivoted back to their original concept, BLACK PACIFIC  has been enriched by these film experiments. Muñoz and Carter delved into their thoughts on race and wrote a script, parts of which will be shared with live audiences. They also produced short video clips that can be projected during the live performance to add a layer of meaning. While they faced many challenges, they have embraced the creative journey and incorporated new elements into the final product.

Don’t get stuck in the lone genius paradigm

As someone who thrives in his inspirational collaborations with others, Muñoz turns a critical eye on the paradigm of the lone genius. He says many young songwriters “move in packs” and create in new ways. One person might write the bridge for a song, while another person writes the chorus, and you end up with ten names credited on a single song. The older generation looks skeptically at this approach, but Muñoz accepts this as simply another means of finding inspiration. These creative “packs” produce a high volume of work, and some of it moves audiences. We might even see this collaborative team-based approach as a hopeful sign that younger artists cultivate creative insights when they work together.

For more on Muñoz’s work with Demone Carter, visit rightstarterproject.com. You can also visit pcmunoz.com, pcmunoz.bandcamp.com, and check out his featured writing in the recent award-winning collection from University of Hawai’i Press, Indigenous Literatures from Micronesia (2019).

This website uses cookies to improve your experience while you navigate through the website. Out of these cookies, the cookies that are categorized as necessary are stored on your browser as they are essential for the working of basic functionalities of the website. We also use third-party cookies that help us analyze and understand how you use this website. These cookies will be stored in your browser only with your consent. You also have the option to opt-out of these cookies. But opting out of some of these cookies may have an effect on your browsing experience.
Necessary Always Enabled
Necessary cookies are absolutely essential for the website to function properly. This category only includes cookies that ensures basic functionalities and security features of the website. These cookies do not store any personal information.
Non-necessary
Any cookies that may not be particularly necessary for the website to function and is used specifically to collect user personal data via analytics, ads, other embedded contents are termed as non-necessary cookies. It is mandatory to procure user consent prior to running these cookies on your website.
SAVE & ACCEPT